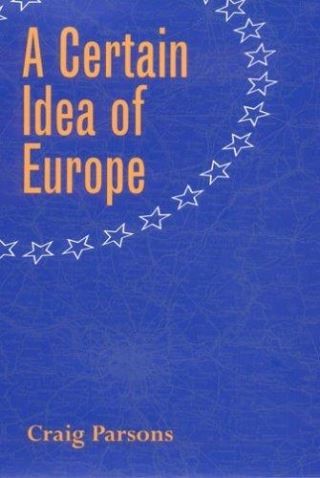 A Certain Idea of Europe

The quasi-federal European Union stands out as the major exception in the thinly institutionalized world of international politics. Something has led Europeans—and only Europeans—beyond the nation-state to a fundamentally new political architecture. Craig Parsons argues in A Certain Idea of Europe that this "something" was a particular set of ideas generated in Western Europe after the Second World War.

In Parsons's view, today's European Union reflects the ideological (and perhaps visionary) project of an elite minority. His book traces the progressive victory of this project in France, where the battle over European institutions erupted most divisively. Drawing on archival research and extensive interviews with French policymakers, the author carefully traces a fifty-year conflict between radically different European plans. Only through aggressive leadership did the advocates of a supranational "community" Europe succeed at building the EU and binding their opponents within it.

Parsons puts the causal impact of ideas, and their binding effects through institutions, at the center of his book. In so doing he presents a strong logic of "social construction"—a sharp departure from other accounts of EU history that downplay the role of ideas and ideology.