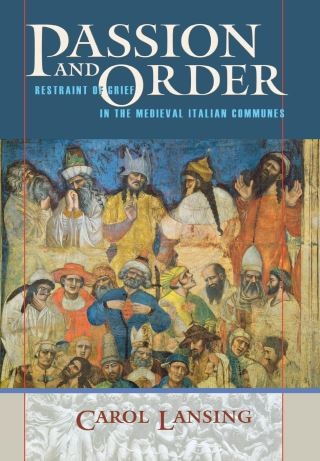 Restraint of Grief in the Medieval Italian Communes

The way in which a society expresses grief can reveal how it views both intense emotions and public order. In thirteenth-century Italian communes, a conscious effort to change appropriate public reaction to death threw into sharp relief connections among urban politics, gender expectations, and understandings of emotionality. In Passion and Order, Carol Lansing explores a dramatic change in thinking and practice about emotional restraint. This shift was driven by politics and understood in terms of gender. Thirteenth-century court cases reveal that male elites were accustomed to mourning loudly and demonstratively at funerals. As many as a hundred men might gather in a town's streets and squares to weep and cry out, even tear at their beards and clothing. Yet these elites enacted laws against such emotional display and proceeded to pay the fines levied against themselves for violating their own legislation.

Political theorists used gender norms to urge men to restrain their passions; histrionic grieving, like lust, was now considered "womanish." Lawmakers drew on a complex of gendered ideas about grief and public order to characterize governance in ways that linked the self and the state. They articulated their beliefs in terms of rules of decorum, how men and women need to behave in order to live together in society. Lansing demonstrates this change through a rich combination of sources: archival records from Orvieto, Bologna, and Perugia; political treatises; literary works, notably Petrarch's letters; and representations of grief in painting and sculpture.