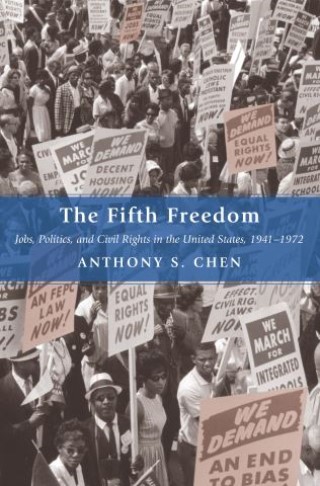 Where did affirmative action in employment come from? The conventional wisdom is that it was instituted during the Johnson and Nixon years through the backroom machinations of federal bureaucrats and judges. The Fifth Freedom presents a new perspective, tracing the roots of the policy to partisan conflicts over fair employment practices (FEP) legislation from the 1940s to the 1970s. Drawing on untapped sources, Anthony Chen chronicles the ironic, forgotten role played by American conservatives in the development of affirmative action.

Decades before affirmative action began making headlines, millions of Americans across the country debated whether government could and should regulate job discrimination. On one side was an interfaith and interracial bloc of liberals, who demanded FEP legislation that would establish a centralized system for enforcing equal treatment in the labor market. On the other side was a bloc of business-friendly, small-government conservatives, who felt that it was unwise to "legislate tolerance" and who made common cause with the conservative wing of the Republican party. Conservatives ultimately prevailed, but their obstruction of FEP legislation unintentionally facilitated the rise of affirmative action, a policy their ideological heirs would find even more abhorrent.

Broadly interdisciplinary, The Fifth Freedom sheds new light on the role of parties, elites, and institutions in the policymaking process; the impact of racial politics on electoral realignment; the history of civil rights; the decline of New Deal liberalism; and the rise of the New Right.

Some images inside the book are unavailable due to digital copyright restrictions.