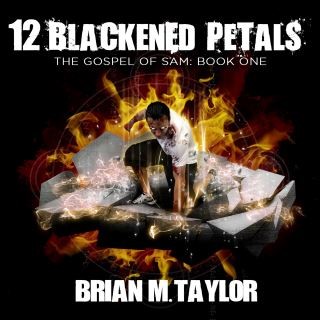 12 Blackened Petals is the tale of a boy that was too afraid to become a man. Instead, he became a god. This heart-wrenching tale has a cast of deep characters and raw emotion. The struggle of the protagonist to come to grips with the world that is crashing down around him is vividly told through gritty prose that grabs the reader tight and doesn't let them go.
Sam's journey through these hardships tells a story of abuse, sadness, loss, redemption and what it means to be more ourselves. Heavy is the heart that carries two souls.
Twenty-three-year-old Sam Rittenhouse has consistently endured a life of hardship, abuse, and struggle. He has learned to mask his inner turmoil and seal away the evil that lives inside him from the rest of the world. But now, the walls he built to contain his demon are starting to crumble.
After surviving an abusive home life that left him physically, mentally and emotionally scared, Sam has started a new life in the city in an attempt to transform into a better person. However, everything goes wrong when he attempts to make some fast cash with his cat burglar of a friend. Their adventure into an ominous cavern beneath the city, to steal a flower, turns deadly and leaves the pair with bullets in their heads.
The flower that they stole is beyond ordinary and brings Sam back to life making him tremendously powerful. This sudden resurrection opens up the floodgates inside of him, releasing Malice, a demon that takes over Sams body each time he resurrects. The viciousness of Malice is a threat to the world as he violently lays waste to the city and its citizens.
Sam struggles to get a grip on his newfound power and take control of Malice before he dies again, unleashing his monster. A constant onslaught of military and private forces seek to subdue him at every turn. Now Sam has become a pawn in a massive game of gods, angels, and demons that have been playing out for centuries.