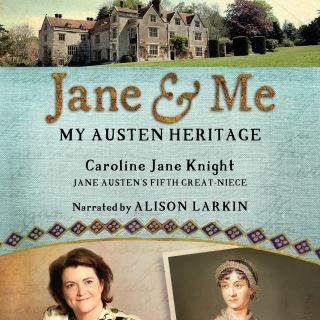 Caroline Jane Knight is the last of the Austen Knight family to grow up at Chawton House, the sixteenth-century English manor house on the ancestral estate where Jane Austen lived and wrote. Caroline ate at the same dining table, read in the same library, explored the same country lanes and shared the same dreams of independence as Jane Austen did.

But when she was seventeen, Caroline and her family were forced to leave the home her family had lived in for centuries. Heartbroken and determined to leave all things Austen behind her, this is the story of Caroline’s journey from an idyllic childhood in which she baked cakes with her Granny for Jane Austen tourists, through personal crisis and success to her eventual embrace of her Austen heritage and the creation of the Jane Austen Literacy Foundation.

A contemporary and dramatic story, it is also a major contribution to the library of works about Jane Austen, including information thrillingly new to Jane Austen’s readers and scholars.

Read by award-winning narrator Alison Larkin whose critically acclaimed recordings of the novels of Jane Austen include Pride and Prejudice and Songs from Regency England, Persuasion and Poems, Northanger Abbey and the History of England and Emma - the 200th anniversary audio edition.

Fifteen per cent of the profits from the sale of this book will be donated to the Jane Austen Literacy Foundation.