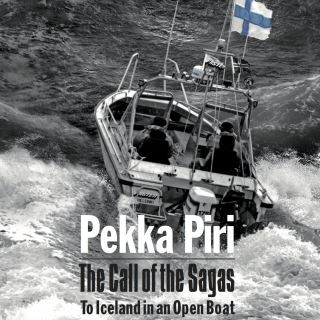 The Call of the Sagas

A THRILLING TRUE STORY THAT MADE NAUTICAL HISTORY

In the year 1994, skipper Pekka Piri and navigator Matti Pulli piloted a 7-meter motorboat from Helsinki over the Baltic Sea, North Sea and North Atlantic to Iceland.

Both 48 years old, Piri had lost his career as a personnel manager, and Pulli had lost his ship, the freighter m/s Finnpolaris, in a wreck off the west coast of Greenland. Now what they both needed was space.

On May 17, 1994, they set out on a 2,200-mile voyage into the unknown. A journey that began with a skipper's dream and a navigator's faith in that dream led to unshakable trust in each other.

Make a historic ocean voyage in a small motorboat to the distant island of the Viking sagas.

Experience the effort and the trust, the determination and the brotherhood, the overwhelming joy of limits broken and a dream fulfilled. You will laugh and you will cry.

The voyage of The Call of the Sagas has become a legend and the book a classic praised by readers and master authors alike.