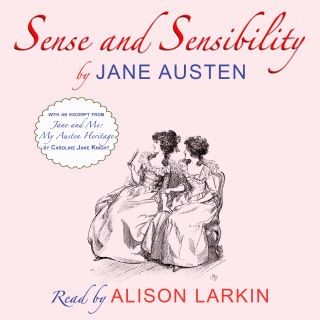 Following her critically acclaimed narration of Jane Austen’s Pride and Prejudice with songs from Regency England, Emma, Persuasion & Poems and Northanger Abbey & The History of England, award-winning narrator Alison Larkin is back, bringing her light comedic touch to this delightful recording of Austen’s first published novel.
Thanks to her manipulative daughter-in-law, Mrs Dashwood and her three daughters must leave their beloved family home in Sussex for a small cottage in Devon. While Marianne, impulsive and passionate to the core falls madly in love with an unsuitable man, her more conventional sister Elinor struggles to hide her true feelings for the man she must try to forget.
Sense and Sensibility is followed by a short excerpt from Jane and Me: My Austen Heritage by Caroline Jane Knight, Jane Austen’s fifth great niece - the last of Austen’s descendants to grow up on the estate where Austen lived and wrote. Like the Dashwoods, Caroline and her family were forced to leave their family home for financial reasons. The parallels are fascinating.

“Raised in England by adoptive parents, Alison Larkin was actually born in America. She herself is a comic writer and performer and she approaches Austen as a satirist. She has genuine theatrical skill, sustained comic creations. The voice reveals all.” — The New Yorker
“There’s a vintage feel to Alison Larkin’s narration… the bell-like quality of her sweetly accented voice harkens back to another, quieter, time. However, her delivery offers a flexibility that is contemporary and easy to hear…A narrator to seek out...” AudioFile Magazine
“Alison Larkin is hugely entertaining” The Times (London)