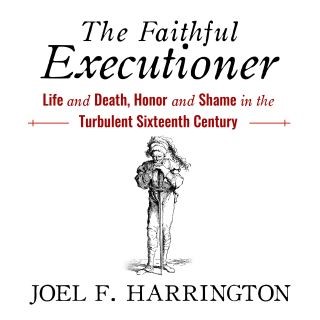 The Faithful Executioner: Life and Death, Honor and Shame in the Turbulent Sixteenth Century

Based on the rare and until now overlooked journal of a Renaissance-era executioner, the noted historian Joel F. Harrington's The Faithful Executioner takes us deep inside the alien world and thinking of Meister Frantz Schmidt of Nuremberg, who, during forty-five years as a professional executioner, personally put to death 394 individuals and tortured, flogged, or disfigured many hundreds more. But the picture that emerges of Schmidt from his personal papers is not that of a monster. Could a man who routinely practiced such cruelty also be insightful, compassionate—even progressive?

In The Faithful Executioner, Harrington vividly re-creates a life filled with stark contrasts, from the young apprentice's rigorous training under his executioner father to the adult Meister Frantz's juggling of familial duties with his work in the torture chamber and at the scaffold. With him we encounter brutal highwaymen, charming swindlers, and tragic unwed mothers accused of infanticide, as well as patrician senators, godly chaplains, and corrupt prison guards. Harrington teases out the hidden meanings and drama of Schmidt's journal, uncovering a touching tale of inherited shame and attempted redemption for the social pariah and his children.

The Faithful Executioner offers not just the compelling firsthand perspective of a professional torturer and killer, but testimony of one man's lifelong struggle to reconcile his bloody craft with his deep religious faith. The biography of an ordinary man struggling for his soul, this groundbreaking book also offers an unparalleled panoramic view of Europe on the cusp of modernity, a society riven by violent conflict at all levels and encumbered by paranoia, superstition, and abuses of power. Thanks to an extraordinary historical source and its gifted interpreter, we recognize far more of ourselves than we might have expected in this intimate portrait of a professional killer from a faraway world.