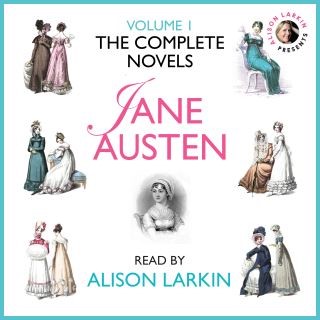 "Alison Larkin herself is a comic writer and performer and she approaches Austen as a satirist. She has genuine theatrical skilll...sustained comic creations. The voice reveals all.” — The New Yorker
Ever since Colin Firth’s Mr Darcy emerged from the lake in the BBC adaptation of Pride and Prejudice, the novels of Jane Austen have become more popular than ever, delighting millions of fans all over the world. Now, Alison Larkin’s critically acclaimed narrations of Austen’s six completed novels are brought together in this very special 200th anniversary audio edition. “Alison Larkin’s narration will captivate listeners from the first sentence” raves AudioFile magazine about the Earphones Award-winning recording of Sense and Sensibility, which starts the collection.
Hailed by The Times as “marvelously light footed… hugely entertaining”, Alison Larkin is the perfect vessel to bring the deft, satirical novels of Jane Austen to sparkling new life.
Alison Larkin is the bestselling author of The English American, a comedienne and the award-winning narrator of over 150 audiobooks. In addition to Pride and Prejudice with Songs from Regency England, Persuasion and Poems, Emma, Northanger Abbey and the History of England and Mansfield Park by Jane Austen, other classic narrations include Lewis Carroll’s Alice in Wonderland and Through the Looking Glass, Fairytales of the Fiercer Sex by the Brothers Grimm et al, Oscar Wilde’s The Importance of Being Earnest (with James Warwick), the AudioFile Earphones award winning recording of Peter Pan and The Inconsiderate Waiter, and Agatha Christie’s The Secret Adversary.
VOLUME ONE
Sense and Sensibility
Pride and Prejudice
Mansfield Park
“…narrating the novels of Jane Austen reminded me that no matter how much the world changes, human nature never does.” (Alison Larkin)
Title and End music "The Lonely Ash Grove" sung by Alison Larkin