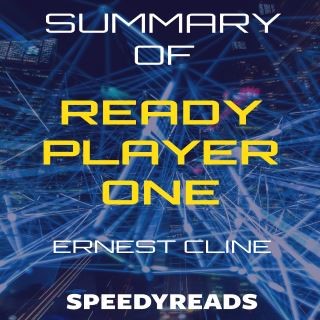 Want to listen to the original, but don't have enough time? Then grab a SpeedyReads version of Ready Player One by Ernest Cline now!

Here's a sample of what you'll hear in this audiobook:

Summary of Ready Player One:

The novel starts with Wade Watts, the narrator and central character, remembering the death of James Halliday, designer of the video game OASIS. In his parting message, Anorak's Invitation, Halliday left a game for the world to play, called The Hunt, and indicated whoever solved the game would get his fortune. The game focused on finding an Easter egg hidden by Halliday. His book, Anorak's Almanac, is a really important text to gain insight into Halliday's mind and assist with the game.

During the first year after Halliday's death, people were obsessed with the game, but the fever eventually died because no one was able to find anything for a long time. After five years, in February 2045, the Copper Key (a really important key in The Hunt) was found by 18-year-old Wade.

Download and start listening now - even if it's three a.m.! Bonus section included.

(Disclaimer: This is NOT the original book.)