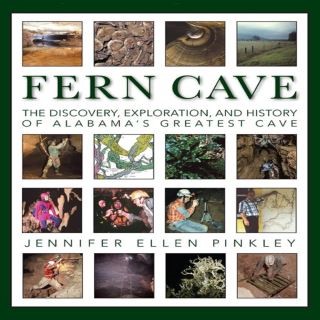 Fern Cave likes to keep its secrets. It features over 15 miles of passage, a 437-foot-deep pit, and 18 distinct levels. Fern Cave is a complex three-dimensional maze of deep pits, sinuous interwoven canyons, massive rooms, and stream passages that wind their way through the heart of a mountain in Alabama. Hidden deep within the cave are unique cave formations and archaeological and paleontological mysteries. Cave explorers from Huntsville, Alabama discovered Fern Cave in 1961. Several years later, Huntsville cavers found two more caves near Fern (the Morgue Cave and New Fern Cave), setting off a flurry of exploration to connect all three caves together into one cave system. Cavers did finally connect all three caves, and along the way discovered much more cave than they ever imagined.

This book tells the story of the discovery, exploration, and protection of Fern Cave. The story describes how cavers found and mapped this massive cave, how they discovered a huge colony of endangered bats, and why the U.S. Fish and Wildlife Service purchased four entrances to the cave. The story continues, describing how cavers worked as volunteers for over 25 years to manage Fern on behalf of the U.S. Fish and Wildlife Service, how cavers worked to create a world-class map of the entire cave system, how a cave conservancy bought one entrance to the cave, and what has changed in the era of the white-nose syndrome bat disease.

The story of Fern is a tale of discovery, exploration, adventure, wonder, politics, nature, biology, science, and beauty.

This is much more than a history book. It's the story of all of the people who worked so hard to explore and understand Fern Cave, the greatest cave in Alabama and one of the finest caves in the United States.