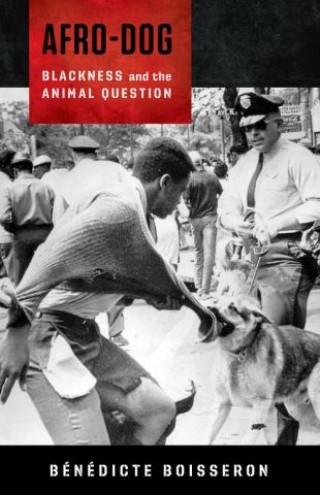 Blackness and the Animal Question

The animal-rights organization PETA asked “Are Animals the New Slaves?” in a controversial 2005 fundraising campaign; that same year, after the Humane Society rescued pets in the aftermath of Hurricane Katrina while black residents were neglected, some declared that white America cares more about pets than black people. These are but two recent examples of a centuries-long history in which black life has been pitted against animal life. Does comparing human and animal suffering trivialize black pain, or might the intersections of racialization and animalization shed light on interlinked forms of oppression?

In Afro-Dog, Bénédicte Boisseron investigates the relationship between race and the animal in the history and culture of the Americas and the black Atlantic, exposing a hegemonic system that compulsively links and opposes blackness and animality to measure the value of life. She analyzes the association between black civil disobedience and canine repression, a history that spans the era of slavery through the use of police dogs against protesters during the civil rights movement of the 1960s to today in places like Ferguson, Missouri. She also traces the lineage of blackness and the animal in Caribbean literature and struggles over minorities’ right to pet ownership alongside nuanced readings of Derrida and other French theorists. Drawing on recent debates on black lives and animal welfare, Afro-Dog reframes the fast-growing interest in human–animal relationships by positioning blackness as a focus of animal inquiry, opening new possibilities for animal studies and black studies to think side by side.