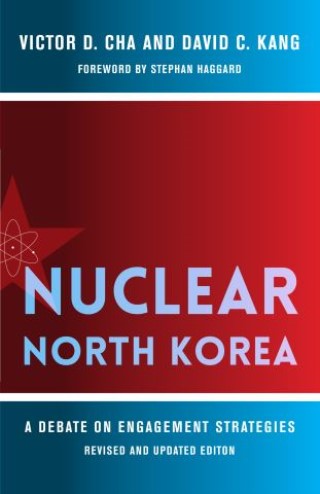 A Debate on Engagement Strategies

Victor D. Cha and David C. Kang’s Nuclear North Korea was first published in 2003 amid the outbreak of a lasting crisis over the North Korean nuclear program. It promptly became a landmark of an ongoing debate in academic and policy circles about whether to engage or contain North Korea. Fifteen years later, as North Korea tests intercontinental ballistic missiles and the U.S. president angrily refers to Kim Jong-un as “Rocket Man,” Nuclear North Korea remains an essential guide to the difficult choices we face.

Coming from different perspectives—Kang believes the threat posed by Pyongyang has been inflated and endorses a more open approach, while Cha is more skeptical and advocates harsher measures, though both believe that some form of engagement is necessary—the authors together present authoritative analysis of one of the world’s thorniest challenges. They refute a number of misconceptions and challenge the faulty thinking that surrounds the discussion of North Korea, particularly the idea that North Korea is an irrational actor. Cha and Kang look at the implications of a nuclear North Korea, assess recent and current approaches to sanctions and engagement, and provide a functional framework for constructive policy. With a new chapter on the way forward for the international community in light of continued nuclear tensions, this book is of lasting relevance to understanding the state of affairs on the Korean peninsula.