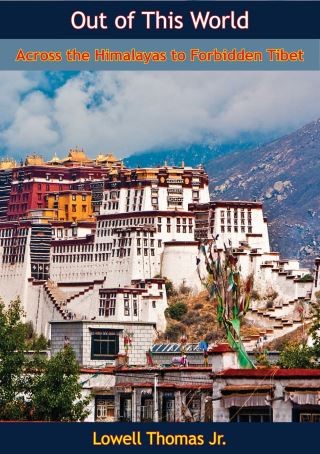 Out of This World

Across the Himalayas to Forbidden Tibet

In 1949, renowned travel writer Lowell Thomas, Jr., along with his father, the American writer and broadcaster best known as the man who made Lawrence of Arabia famous, was invited by the Tibetan government to make a film there, in the hope that their reports would help persuade the U.S. government to defend Tibet against the Chinese. The trip lasted 400 days, and the father-and-son team were the last Westerners to reach Lhasa before the Chinese invasion and occupation.

The trek garnered worldwide attention when Lowell Thomas, Jr. succeeded in getting his father safely across the Himalayas to India after a serious accident on a 17,000-foot pass.

Out of This World, which was first published in 1950 and became a bestseller, tells the story of this journey that the author describes as “a climax to his father’s lifetime of adventure” and “probably the greatest travel adventure I will ever have”.

Lowell Thomas Jr.: Lowell Thomas Jr. (Oct. 6, 1923 - Oct. 1, 2016) was an American politician and film producer who collaborated with his father, the accomplished reporter and author Lowell Thomas, on several projects before becoming an Alaskan State Senator in the early 1970s, and later the third Lieutenant Governor of Alaska (1974-1978). In the 1980s, he owned and operated Talkeetna Air Taxi, an Alaska bush flying service.

Born in London, England, he grew up in Watertown, Conn. where he graduated from the Taft School in 1942. He then studied at Dartmouth College, before joining the United States Army Air Corps. In 2011, The Taft School honored him with the Horace D. Taft Alumni Medal and Citation of Merit.

In 1949 he travelled with his father across the Himalayas to the Dalai Lama’s throne at Lhasa. The CBS did not broadcast the resultant film, Expedition to Lhasa, Tibet, until years later, but his book about the expedition, Out of This World, was published in 1950 and became a bestseller.

In 1960, after the 14th Dalai Lama of Tibet was given refuge in India, he wrote the book The Silent War in Tibet in which Thomas describes the brutal Chinese Communist invasion of Tibet beginning in 1950, as well as the armed Tibetan resistance by citizens and lamas which began in the mid 1950’s. In 2006, the Dalai Lama bestowed the International Campaign for Tibet’s Light of Truth Award on Lowell Jr and referred to him as “one of the grandfathers of modern day Tibet.”

The Thomas’s moved to Alaska in 1958 where they would remain for the remainder of their lives. After his political career, Thomas returned to flying, owning and operating Talkeetna Air Taxi and flying a Helio Courier for research and documentary work as well as flying climbers to and from Denali’s Kahiltna Glacier and in the Alaska Range. He remained an active pilot into his 80s.