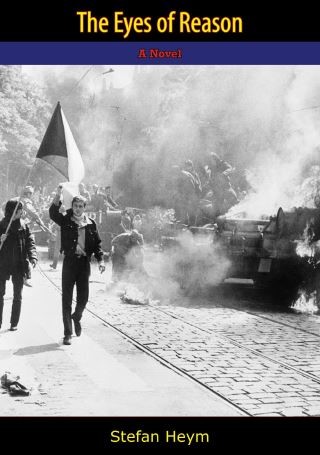 The Eyes of Reason

This is a novel by renowned German writer Stefan Heym, first published in 1951, in which fact and fiction relating to the Communist revolution in Czechoslovakia are skillfully blended in a gripping tale of one of the enigmas of our times.

As the story—which centers around three brothers, Thomas, Joseph and Karel—unfolds, the reader becomes acutely aware of the forces that created the anomalies, of those elements brought into focus by the Nazi occupation, the working of the Underground, the tragedies of prison camps, and the hunger for power and survival.

Stefan Heym: Stefan Heym (10 April 1913 - 16 December 2001) was a renowned East German author and political activist who spent almost 30 years in the United States. He published works in English and German.

Born Helmut Flieg into a Jewish merchant family in Chemnitz, Saxony, he was expelled from school on account of the local Nazis in 1931. He completed school in Berlin and began a degree in media studies. He fled to Czechoslovakia in 1933, where he took the name Stefan Heym, worked for German newspapers published in Prague, including Prager Tagblatt and Bohemia, and published articles in translation by Czech newspapers.

In 1935 Heym received a grant from a Jewish student association and continued his degree at the University of Chicago, graduating in 1936. He was based in New York as Editor-in-Chief of the German-language weekly Deutsches Volksecho from 1937-1939. He published his bestselling first novel, Hostages, in 1942. He enlisted in the U.S. Army in 1943 and returned to Europe after D-Day as a psychological warfare expert, which later became the basis for his novel Crusaders (1948).

After WWII he led the Ruhrzeitung in Essen and became editor of Die Neue Zeitung in Munich. He was transferred back to the U.S. and in the following years worked as a freelance author, wrote a column in the Soviet-run paper Tägliche Rundschau (1953-1957), and finally channelled his energies into literature.

Heym was elected to the Bundestag as an independent MP in 1994, but resigned a year later.

He was honoured with honorary doctorates from the University of Bern (1990) and University of Cambridge (1991), and honorary citizenship of Chemnitz, his birthplace (2001). He was also awarded the Jerusalem Prize (1993) for literature ‘for the freedom of the individual in society’, and the peace medal of the IPPNW. Previously he had won the Heinrich-Mann-Prize (1953), and the National Prize of the GDR, 2nd class (1959).