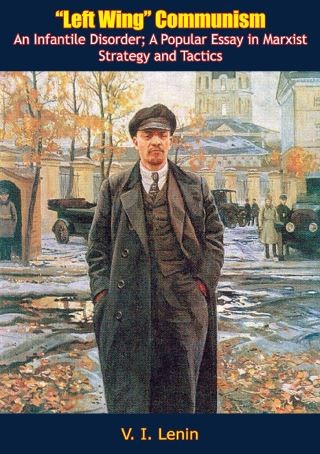 An Infantile Disorder; A Popular Essay in Marxist Strategy and Tactics

"Left-Wing" Communism: An Infantile Disorder is a work by Vladimir Lenin attacking assorted critics of the Bolsheviks who claimed positions to their left. Most of these critics were proponents of ideologies later described as left communism.

The book was written in 1920 and published in Russian, German, English and French later in the year. A copy was then distributed to each delegate at the 2nd World Congress of the Comintern, several of whom were mentioned by Lenin in the work.

The present volume is a New Translation that was first published in the U.S. in 1940 and the UK in 1942. As with the earlier editions, the book is divided into ten chapters and contains an appendix, including a letter from David Wijnkoop on behalf of the Communist Party of Holland.

V. I. Lenin: Vladimir Ilyich Ulyanov (22 April 1870 - 21 January 1924) , better known by the alias Lenin, was a Russian communist revolutionary, politician and political theorist. He served as head of government of the Russian Republic from 1917-1918, of the Russian Soviet Federative Socialist Republic from 1918-1924 and of the Soviet Union from 1922-1924. Under his administration, Russia and then the wider Soviet Union became a one-party communist state governed by the Russian Communist Party. Ideologically a Marxist, he developed political theories known as Leninism.

Born to a wealthy middle-class family in Simbirsk, Lenin embraced revolutionary socialist politics following his brother's execution in 1887. Expelled from Kazan Imperial University for participating in protests against the Russian Empire's Tsarist government, he began studies for a law degree. He moved to St. Petersburg in 1893 and became a senior figure in the Marxist Russian Social Democratic Labour Party (RSDLP). In 1897, he was arrested, exiled to Shushenskoye for three years, and moved to Western Europe, becoming a prominent party theorist through his publications. In 1903, he led the Bolshevik faction against the Mensheviks and later campaigned for WWI to be transformed into a Europe-wide proletarian revolution, believing this would overthrow capitalism and replace it with socialism. After the 1917 February Revolution ousted the Tsar and established a Provisional Government, Lenin returned to Russia to play a leading role in the October Revolution, in which the Bolsheviks overthrew the new regime.

Lenin's Bolshevik government withdrew from WWI by signing a treaty with the Central Powers and promoted world revolution through the Communist International. His administration defeated right and left-wing anti-Bolshevik armies in the Russian Civil War from 1917-1922 and oversaw the Polish-Soviet War of 1919-1921.