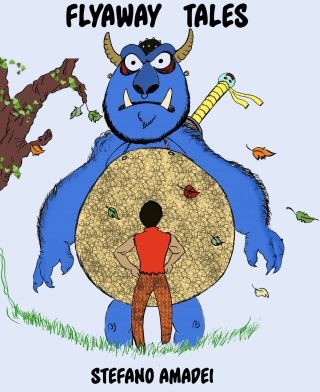 An imaginative mix of songs, riddles and fairy tales in ten exciting stories. Take a ticket for Cinema Bianchini and you know how dreams are formed, what happens to the parents when the kids go to bed, what is the formula of the mixture of invisibility, what cats do when they are wandering about. Come to meet Ali the scribe's apprentice, the little fairy and Gaia, if you dare, take a short walk into the Ogre's garden! Contains the story "Never Been Dreamt" winner of the Second prize for the national writing contest "Sassi & Parole" in 2012 announced by the City of Mercallo (Va).

Stefano Amadei: I was born in Varese (Varese) Italy on the 10/28/1974 and graduated in 1993.
For many years I have written articles for local periodicals such as "Here and Now" and for "Open Space", the Municipality Magazine for youth and have successfully taken part in a few Writing and Poetry Courses.
I mainly write stories and short tales for children but sometimes I try to write Science Fiction.
In 2012 I won the second prize in the national writing contest called "Pebbles & Words" (Sassi & Parole) with the title "Never Been Dreamt", which explains a dream through the eyes of a young girl.
In 2014 I published a collection of children tales in an illustrated ebook titled "FLYAWAY TALES (Racconti Svolazzanti, in italian) through the self-publishing website "StreetLib".
I live in Ispra (Va) Italy where, with my wife Tiziana and we are the happy parents of little Ivana.