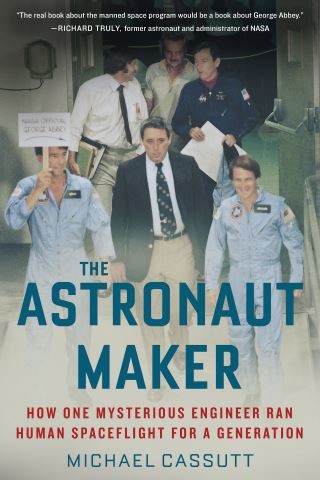 How One Mysterious Engineer Ran Human Spaceflight for a Generation

"The real book about the manned space program would be a book about George Abbey." —Richard Truly, former astronaut and Administrator of NASA
One of the most elusive and controversial figures in NASA's history, George W. S. Abbey was called "the Dark Lord," "the Godfather," and "UNO" (unidentified NASA official) by those within NASA. He was said to be secretive, despotic, a Space Age Machiavelli. Yet Abbey had more influence on human spaceflight than almost anyone in history. From young pilot and wannabe astronaut to engineer, bureaucrat, and finally director of the Johnson Space Center ("mission control"), Abbey's story has never been fully told—until now. The Astronaut Maker takes readers inside NASA to learn the real story of how Abbey rose to power and wielded it out of the spotlight. Over a 37-year career he oversaw the selection of every astronaut class from 1978 to 1987, deciding who got to fly, and when; was with the Apollo 1 astronauts the night before the fire that killed them in January 1967; was in mission control the night of the Apollo 13 accident and organized the recovery effort; led NASA's recruitment of women and minorities as Space Shuttle astronauts—including hiring Sally Ride; and much more. By the coauthor of the acclaimed astronaut memoirs DEKE! and We Have Capture and informed by countless hours of interviews with Abbey and his family, friends, adversaries, and former colleagues, The Astronaut Maker is the ultimate insider's account of ambition and power politics at NASA.

Michael Cassutt: Michael Cassutt is the coauthor of Deke!, the autobiography of astronaut Donald K. "Deke" Slayton, and We Have Capture, the autobiography of astronaut Lt. Gen. Thomas Stafford and the author of three editions of Who's Who in Space (1987, 1993, 1999) as well as five space-themed novels and 30 short stories published in Isaac Asimov's Science Fiction and elsewhere. He has contributed numerous articles to Air & Space/Smithsonian and other publications and has appeared as a space history expert in documentaries for the History Channel. As a television writer and producer, Cassutt has been a member of the writing team of a dozen different series, from Twilight Zone to Max Headroom to The Dead Zone. He is currently co-executive producer of SyFy Channel's series Z Nation and is developing a drama titled Captain Cosmos with George R. R. Martin, of Game of Thrones. He lives in Los Angeles.