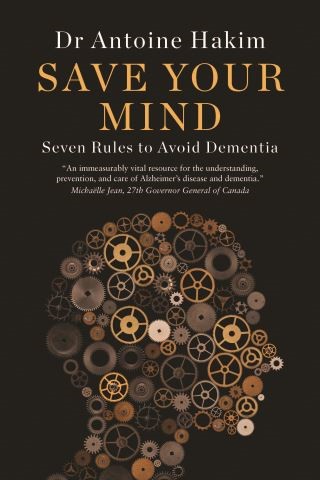 This practical and informative book says that you can avoid dementia and the loss of control that accompanies this brain disease by following the author’s seven specific rules to exercise the brain and body. From the winner of Canada’s most prestigious science award, The Canada Gairdner Awards, this book also offers an authoritative and easy-to-understand explanation of how the brain works and what happens when dementia afflicts it. Author Dr. Antoine Hakim tells about some of the mind-blowing research that shows how elderly nuns maintained their cognitive abilities even though their brains displayed the physical signs of Alzheimer’s. He argues that you can build up a defensive system, a cognitive reserve, to protect your mind if you have a stroke. It’s even possible to reverse the early signs of dementia. Save Your Mind is an essential book for anyone who wants to take proactive steps to prevent dementia and the loss of mental control.

Dr. Antoine Hakim, until recently Director of Neuroscience Research at Ottawa Hospital Research Institute and CEO & Scientific Director of the Canadian Stroke Network, draws on 40 years of neurology practice for Save Your Mind.

Dr. Hakim first trained as a chemical engineer in Alberta. He then earned a PhD in Biomedical Engineering from Rensselaer Polytechnic Institute and an MD at Albany Medical in New York. He completed his neurology residency at the Montreal Neurological Institute and later became a professor at McGill University. He came to Ottawa in 1999. In 2007, Dr. Hakim was named an Officer of the Order of Canada. In 2013, he was inducted into the Canadian Medical Hall of Fame.