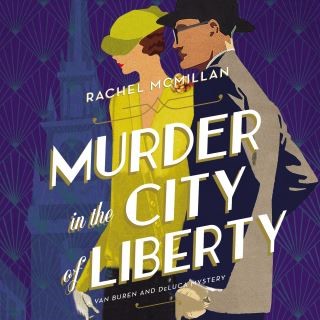 Murder in the City of Liberty

Hamish DeLuca and Regina “Reggie” Van Buren have a new case—and this one could demand a price they’re not willing to pay.

Determined to make a life for herself, Reggie Van Buren bid goodbye to fine china and the man her parents expected her to marry and escaped to Boston. What she never expected to discover was that an unknown talent for sleuthing would develop into a business partnership with the handsome, yet shy, Hamish DeLuca.

Their latest case arrives when Errol Parker, the leading base stealer in the Boston farm leagues, hires Hamish and Reggie to investigate what the Boston police shove off as a series of harmless pranks. Errol believes these are hate crimes linked to the outbreak of war in Europe, and he’s afraid for his life. Hamish and Reggie quickly find themselves in the midst of an escalating series of crimes.

When Hamish has his carefully constructed life disrupted by a figure from his past, he is driven to a decision that may sever him from Reggie forever . . . even more than her engagement to wealthy architect Vaughan Vanderlaan.

Rachel McMillan is the author of The Herringford and Watts mysteries, The Van Buren and DeLuca mysteries, and The Three Quarter Time series of contemporary Viennese romances. She is also the author of Dream, Plan, Go: A Travel Guide to Inspire Independent Adventure. Rachel lives in Toronto, Canada.