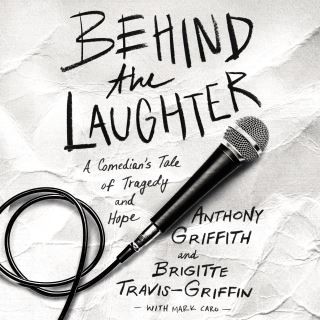 A Comedian’s Tale of Tragedy and Hope

“I was living every comic’s dream…with a nightmare attached.”

Anthony Griffith, a stand-up comic from Chicago’s South Side, has lived on the borderline of comedy and tragedy. At the very time his career as a stand-up comedian was taking off, and he had finally achieved his dream of appearing on The Tonight Show, he was also enduring an unimaginable personal nightmare: his two-year-old daughter, Brittany Nicole, was dying from cancer. While Anthony performed under bright lights, he struggled not to succumb to the darkness of losing a child.

Behind the Laughter asks, When your world is falling apart, how do you keep going? It’s the story of how Anthony and his wife, Brigitte, learned to endure the most painful of times and emerge on the other side of the “zombie years.”

This memoir is deeply moving yet also humorous—packed with laughs as Anthony takes us from his gun-toting grandma’s home to Chicago’s white and black comedy clubs, then to Hollywood, and to the world of network television. The surprising twists along Anthony’s path highlight the power of God that goes before us and prepares the way—a truth that later encourages Anthony and Brigitte after Brittany’s death and moves them to reach out and comfort others going through similar difficulties.

With humor and deep insights into the human spirit, Behind the Laughter explores the bonds of not only parent and child but also husband and wife. While Anthony and Brigitte’s story is uniquely theirs, it elicits powerful, relatable emotions and lessons that are universal and inspiring.

Anthony Griffith, a successful stand-up comedian for more than thirty years, made his way from Chicago’s South Side to the city’s comedy clubs and out to Los Angeles, where he performed multiple times on The Tonight Show with Johnny Carson and later with Jay Leno. He has been featured in specials for Comedy Central, HBO, and Showtime and on The Arsenio Hall Show. Also an actor, Griffith has appeared in several movies, including Panther, Tales from the Hood, and Charlie’s Angels: Full Throttle, and received a Daytime Emmy for his performance in the TV movie Our Father. Griffith also performed in the TV series Curb Your Enthusiasm and The Bernie Mac Show.

Dr. Brigitte Travis-Griffin is a clinical psychologist specializing in a concierge delivery system of therapy for entertainment and creative professionals. She and Anthony Griffith have been married for more than thirty years. Brigitte received her PsyD from the California School of Professional Psychology and her BS from UCLA.

Mark Caro is the award-winning author of The Foie Gras Wars and Take It to the Bridge: Unlocking the Great Songs Inside You. For more than twenty-five years, he covered entertainment, food, and culture for the Chicago Tribune. He continues to contribute to the New York Times, Chicago magazine, and other publications.