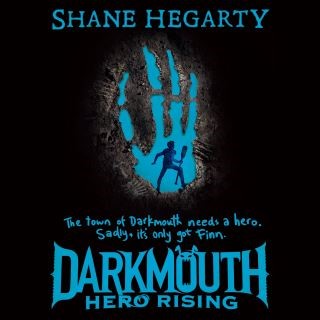 Finn was born to stop the monsters from invading his town. But he’d really rather not. He dreams of having an ordinary life, and right now, things can’t get any worse. Legends are running riot. Half-Hunters are out of control. And Darkmouth has been taken away from him.

But something even more terrifying lurks beneath the surface: an ancient horror threatening both our world and the Infested Side.

So scratch that. Things can get worse. Much worse.

It’s up to Finn to save Darkmouth. Too bad he’d rather be doing…anything else.

Perfect for fans of How to Train Your Dragon, the final book in the Darkmouth series is a hilarious and action-packed adventure filled with beasts of the winged, fanged, and hungry variety.

Shane Hegarty was born and raised in Skerries, Ireland, where he now lives with his wife and four children but no pets since an unfortunate incident with the family goldfish. He is a journalist with the Irish Times as well as the author of Darkmouth #1: The Legends Begin.