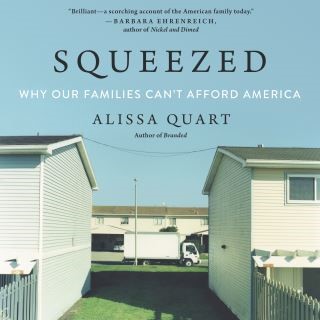 Why Our Families Can't Afford America

Families today are squeezed on every side—from high childcare costs and harsh employment policies to workplaces without paid family leave or even dependable and regular working hours. Many realize that attaining the standard of living their parents managed has become impossible.

Alissa Quart, executive editor of the Economic Hardship Reporting Project, examines the lives of many middle-class Americans who can now barely afford to raise children. Through gripping firsthand storytelling, Quart shows how our country has failed its families. Her subjects—from professors to lawyers to caregivers to nurses—have been wrung out by a system that doesn’t support them, and enriches only a tiny elite.

Interlacing her own experience with close-up reporting on families that are just getting by, Quart reveals parenthood itself to be financially overwhelming, except for the wealthiest. She offers real solutions to these problems, including outlining necessary policy shifts, as well as detailing the DIY tactics some families are already putting into motion, and argues for the cultural reevaluation of parenthood and caregiving.

Written in the spirit of Barbara Ehrenreich and Jennifer Senior, Squeezed is an eye-opening audiobook. Powerfully argued, deeply reported, and ultimately hopeful, it casts a bright, clarifying light on families struggling to thrive in an economy that holds too few options. It will make listeners think differently about their lives and those of their neighbors.

Alissa Quart  is the executive editor of the journalism non-profit Economic Hardship Reporting Project. She co-founded its current incarnation with Barbara Ehrenreich. She is also the author of four previous acclaimed books, “Branded,’’ “Republic of Outsiders,’’ “Hothouse Kids’’ and the poetry book “Monetized.’’ She writes the Outclassed column for The Guardian and has published features and reported commentary in many magazines and newspapers, most recently for The Atlantic, The New York Times, The Nation and The New York Review of Books. She has won the Columbia Journalism School’s 2018 Alumni Award and the LA Press Club Award for Commentary, was a 2010 Nieman fellow at Harvard University, and has been nominated for an Emmy and a National Magazine Award.