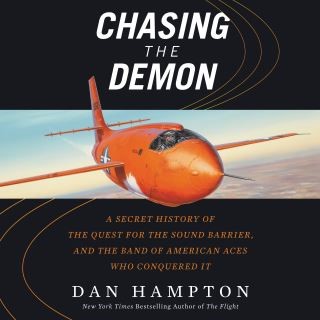 A Secret History of the Quest for the Sound Barrier, and the Band of American Aces Who Conquered It

In the aftermath of World War II, the United States accelerated the development of technologies that would give it an advantage over the Soviet Union. Airpower, combined with nuclear weapons, offered a formidable check on Soviet aggression. In 1947, the United States Air Force was established. Meanwhile, scientists and engineers were pioneering a revolutionary new type of aircraft which could do what no other machine had ever done: reach mach 1—a speed faster than the movement of sound—which pilots called "the demon."

Chasing the Demon recreates an era of excitement and danger, adventure and innovation, when the future of the free world was at stake and American ingenuity took the world from the postwar years to the space age. While the pressure to succeed was high, it was unknown whether man or machine could survive such tremendous speeds.

A decorated military pilot with years of experience flying supersonic fighter jets, Dan Hampton reveals in-depth the numerous potential hazards that emerged with the Air Force’s test flights: controls broke down, engines flamed out, wings snapped, and planes and pilots disintegrated as they crashed into the desert floor. He also introduces the men who pushed the envelope taking the cockpits of these jets, including World War II ace Major Dick Bong and twenty-four-year-old Captain Chuck Yeager, who made history flying the Bell X-1 plane faster than the speed of sound on October 14, 1947.

Chasing the Demon recalls this period of the emerging Cold War and the brave adventurers pursing the final frontier in aviation.

Lieutenant Colonel (Ret.) Dan Hampton flew 151 combat missions during his twenty years (1986–2006) in the United States Air Force. For his service in the Iraq War, Kosovo conflict, and first Gulf War, Col. Hampton received four Distinguished Flying Crosses with Valor, a Purple Heart, eight Air Medals with Valor, five Meritorious Service medals, and numerous other citations. He is a graduate of the USAF Fighter Weapons School, USN Top Gun School (TOGS), and USAF Special Operations School. A frequent guest analyst on CNN, Fox News, and MSNBC discussing foreign affairs, military, aviation, and intelligence issues, he has published in Aviation History, the Journal of Electronic Defense, Air Force Magazine, Vietnam magazine, and Airpower magazine, and written several classified tactical works for the USAF Weapons Review. He is the author of the national bestsellers Viper Pilot and Lords of the Sky, as well as a novel, The Mercenary.