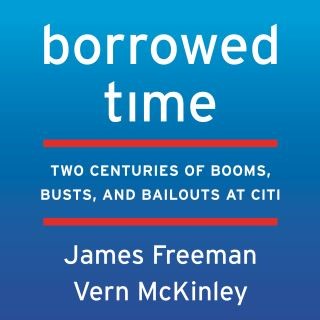 Two Centuries of Booms, Busts, and Bailouts at Citi

The alarming, untold story of Citigroup—one of the largest financial institutions in the world—from its founding in 1812 to its role in the 2008 financial crisis, and the many near-death experiences in between.

During the 2008 financial crisis, we were told that Citi was a victim of events beyond its control—the larger financial panic, unforeseen economic disruptions and a perfect storm of credit expansion and private greed. To save the economy and keep the bank afloat, the government provided huge infusions of cash through multiple bailouts that frustrated and angered the American public.

But, as Wall Street Journal writer James Freeman and financial expert Vern McKinley reveal, the 2008 crisis was just one of many disasters Citi has experienced since its founding more than two hundred years ago. In Borrowed Time they reveal Citi’s disturbing history of instability and government support. It’s a story that neither Citi nor Washington wants told.

Citi has long been tied to the federal government in a relationship that has benefited both. From its earliest years, its well-connected leadership—most of its initial stockholders had owned stock in the Bank of the United States—took massive risks that led to crisis. But thanks to a rescue by private investors, including John Jacob Astor, the bank survived throughout the nineteenth century.

This is just the tip of the iceberg. The scale of the financial panic of 2008 was hardly unprecedented. As Borrowed Time shows, crisis and outright disasters have been surprisingly common during the century of government-protected banking—especially at Citi.

James Freeman has been the Wall Street Journal’s principal writer of unsigned editorials on Wall Street banking and regulation since the crisis of 2008. Under his own byline, he has published extended interviews with many of the most consequential people in finance, from the founder of the world’s largest hedge fund to the lead software developer of the Bitcoin project. He is a Fox News contributor and frequently appears on the Fox Business Network. He has also appeared on CNN, CNBC and MSNBC.

Vern McKinley’s clients include the U.S. Treasury, International Monetary Fund, and KfW (German Development Bank). He has advised governments in over 30 countries, many of which were experiencing financial crises at the time. Prior to his consulting career he worked for the Board of Governors of the Federal Reserve, the Federal Deposit Insurance Corporation (FDIC), the Resolution Trust Corporation and the Department of the Treasury’s Office of Thrift Supervision. His career started with the FDIC in the midst of the banking crisis in Texas during the 1980s. McKinley is credited with correctly predicting in 1997 that the structure of Fannie Mae and Freddie Mac would one day lead to the meltdown of the two institutions. All opinions are his own.