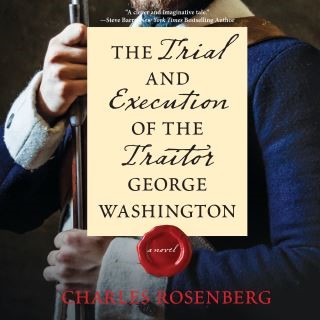 The Trial and Execution of the Traitor George Washington

A thought-provoking novel that imagines what would have happened if the British had succeeded in kidnapping General George Washington.

British special agent Jeremiah Black, an officer of the King’s Guard, lands on a lonely beach in the wee hours of the morning in late November 1780. The revolution is in full swing but has become deadlocked. Black is here to change all that.

His mission, aided by Loyalists, is to kidnap George Washington and spirit him back to London aboard the HMS Peregrine, a British sloop of war that is waiting closely offshore. Once he lands, though, the “aid by Loyalists” proves problematic because some would prefer just to kill the general outright. Black manages—just—to get Washington aboard the Peregrine, which sails away.

Upon their arrival in London, Washington is imprisoned in the Tower to await trial on charges of high treason. England’s most famous barristers seek to represent him but he insists on using an American. He chooses Abraham Hobhouse, an American-born barrister with an English wife—a man who doesn’t really need the work and thinks the “career-building” case will be easily resolved through a settlement of the revolution and Washington’s release. But as greater political and military forces swirl around them and peace seems ever more distant, Hobhouse finds that he is the only thing keeping Washington from the hangman’s noose.

Drawing inspiration from a rumored kidnapping plot hatched in 1776 by a member of Washington’s own Commander-in-Chief Guard, Charles Rosenberg has written a compelling novel that envisions what would take place if the leader of America’s fledgling rebellion were taken from the nation at the height of the war, imperiling any chance of victory.

Charles Rosenberg: Charles Rosenberg is the author of the legal thriller Death on a High Floor and its sequels. The credited legal consultant to the TV shows LA Law, Boston Legal, The Practice, and The Paper Chase, he was also one of two on-air legal analysts for E! Television's coverage of the O.J. Simpson criminal and civil trials. He teaches as an adjunct law professor at Loyola Law School and has also taught at UCLA, Pepperdine and Southwestern law schools. He practices law in the Los Angeles area.