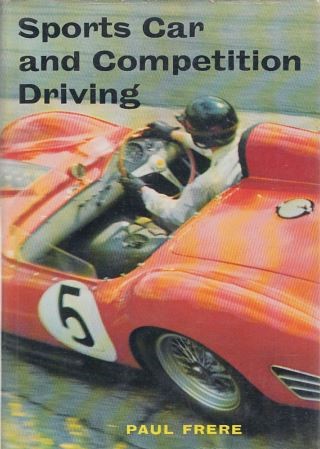 This practical manual been written for the car-owner who is already a competent driver under normal road conditions but who would like to be a better-than-average driver, and especially for the man who wishes to try his hand at competition work—both racing and rallying.

Paul Frère—Grand Prix driver and engineer, Le Mans winner and author—gives invaluable instruction based on his many years of experience on the racing circuits of Europe and America. He deals briefly with theoretical matters and then proceeds with his driving lessons: making the most of practice; learning a circuit; racing starts; cut-off and braking points; slides and drifts; taking advantage of road camber; passing and being passed; slipstreaming; driving under wet and icy conditions and racing at night. He also gives practical advice on race tactics, flag marshals, time keeping, pit signals, race wear, seat belts, the choice of gear ratios and tyres and the different problems posed by road and track racing.

With the aid of 60 photographs and diagrams M. Frère explains the correct line to take on various types of corners and why, the effects of peculiarities of surface, and analyses the forces acting on a car in cornering.

The book is “required reading” for every ambitious driver in Club and Formula Junior racing and for Rallymen.

Paul Frère: Paul Frère (30 January 1917 - 23 February 2008) was a racing driver and journalist from Belgium. He participated in eleven World Championship Formula One Grands Prix debuting on 22 June 1952 and achieving one podium finish with a total of eleven championship points. He drove in several non-Championship Formula One races. He also won the 1960 24 Hours of Le Mans, driving for Ferrari with fellow Belgian teammate Olivier Gendebien. Frère died on 23 February 2008 in Saint-Paul-de-Vence (France). Turn 15 at the Circuit de Spa-Francorchamps, formerly the first part of the Stavelot corner, has been renamed in his honour.