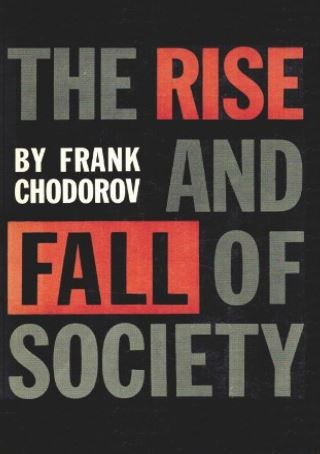 The Rise And Fall Of Society

An Essay On The Economic Forces That Underlie Social Institutions

Frank Chodorov adored the work of Albert Jay Nock, particularly Nock’s writings on the State, and so Chodorov set out to rework Nock’s book in his own style—with this book being the result.

It describes in detail the difference between the “State” and “Society” and highlights issues current to this day, such as high tax, high spend and loss of freedom. The book illustrates the formation of a society, its government, and the eventual dismantling of society by governing political bodies.

Rothbard wrote of this book: “Frank’s final flowering was his last ideological testament, the brilliantly written The Rise and Fall of Society, published in 1959, at the age of 72.”

Frank Chodorov: Frank Chodorov (February 15, 1887 - December 28, 1966) was an American member of the Old Right, a group of libertarian thinkers who were non-interventionist in foreign policy and opposed both the American entry into World War II and the New Deal. He was called by Ralph Raico “the last of the Old Right greats.”