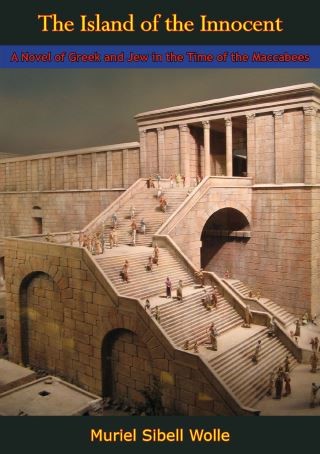 The Island of the Innocent

A MIGHTY NOVEL OF PERSECUTION AND MASSACRE AND A LOVE THAT DEFIED DEATH!

THEY MET IN JERUSALEM

A young Greek doctor, devoted to the pleasures of the senses and the intellect, and a passionate, pious daughter of Israel. Hopelessly in love, their beliefs were irreconcilable—until the Syrian-hordes struck at Jerusalem, defiling and slaughtering. Then the woman who loved God and the man who loved liberty united with the embattled Jews under the banner of Judas the Maccabee, to strike back at the enemy who would destroy them both!

“…a richly informed addition to the author’s ‘Testament of Man’ series, sensitively created by the fusion of art and scholarship.”—The New York Times

“Vardis Fisher is one of the most remarkable of American authors. Viewing himself, in effect, as the reincarnation of conflicting personalities of many generations, the recipient of the transmitted subconscious memories of centuries, Fisher went back in his Testament of Man’ to the ape-man progenitor and came up the long, uncertain booby-trapped path. He projected himself into the emerging, rising human being, and went with him through thousands of years of progressions, crises, setbacks, emotions, surges, to get at understanding, if he could, of the basic motivations today in the conduct of the heir of all the human race…the whole sequence is one of the most extraordinary feats in imaginative divination in original Occidental literature.”—Clark Kinnaird, King Features Syndicate

Dr. Vardis Fisher: Vardis Alvero Fisher (March 31, 1895 - July 9, 1968) was an American writer best known for his popular historical novels of the Old West. He also wrote the monumental 12-volume Testament of Man (1943-1960) series of novels, depicting the history of humans from cave to civilization.

Born in Annis, Idaho, near present-day Rigby, of a Mormon family and descent, he graduated from the University of Utah in 1920. He earned a Master of Arts degree (1922) and a Ph.D. (1925) at the University of Chicago.

Between 1935-1939 he worked as the director of the Idaho Writer’s Project of the Works Progress Administration (WPA) of the Franklin D. Roosevelt administration. He wrote several books about Idaho. He was also a newspaper columnist for the Idaho Statesman and Idaho Statewide (which later became the Intermountain Observer).

In order to write his Testament of Man (1943-1960) series, he read more than 2,000 books on anthropology, history, psychology, theology and comparative religion. His other works include the historical novel, Children of God, tracing the history of the Mormons, which won the 1939 Harper Prize in Fiction; the novel Mountain Man (1965), which was adapted for Sydney Pollack’s film, Jeremiah Johnson (1972); The Mothers: An American Saga of Courage (1943), which tells the story of the Donner Party tragedy; and Tale of Valor (1960), a novel recounting the Lewis and Clark Expedition. He also wrote a non-fiction book on how to write fiction books called God or Caesar? (1953).