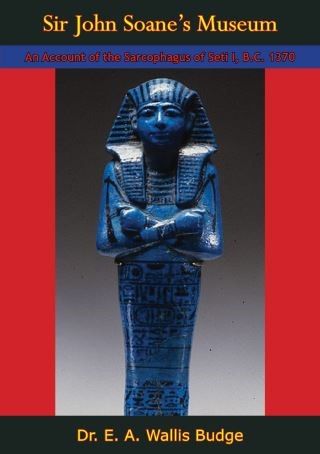 Originally published in 1908, this is an account of the Sarcophagus of Seti I., written by E. A. Wallis Budge, M.A., Litt.D., Keeper of the Egyptian and Assyrian Antiquities in the British Museum. Dr. Budge includes in his comprehensive essay a description of the tomb in which the Sarcophagus was discovered by Giovanni Belzoni in 1815; and, in addition to describing the various scenes represented on the latter, he further elucidates the subject with accounts of the religion of the worshippers of the gods Osiris and Rā.

Sir John Soane’s Museum is richly illustrated throughout with all the scenes depicted, and is the most succinct account of this unique Sarcophagus.

Dr. E. A. Wallis Budge: Sir Ernest Alfred Thompson Wallis Budge (27 July 1857 - 23 November 1934) was an English Egyptologist, Orientalist, and philologist who worked for the British Museum and published numerous works on the ancient Near East. Born in 1857 in Bodmin, Cornwall, he developed an interest in languages before he was ten years old. He left school in 1869 to work but studied Hebrew and Syriac in his spare time. From 1878-1883, he studied Hebrew, Syriac, Ethiopic and Arabic at Cambridge University, and thereafter continued to study Assyrian independently. He entered the British Museum in 1883 in the recently renamed Department of Egyptian and Assyrian Antiquities and made numerous trips to Egypt and the Sudan on behalf of the museum to buy antiquities, helping to build its collection of cuneiform tablets, manuscripts, and papyri. Budge published many books on Egyptology, helping to bring the findings to larger audiences. In 1920 he was knighted for his service to Egyptology and the British Museum. In the same year he published his autobiography, By Nile and Tigris. He retired from the British Museum in 1924 and continued to write and publish several books; his last work was From Fetish to God in Ancient Egypt (1934). Budge died in 1934 aged 77.