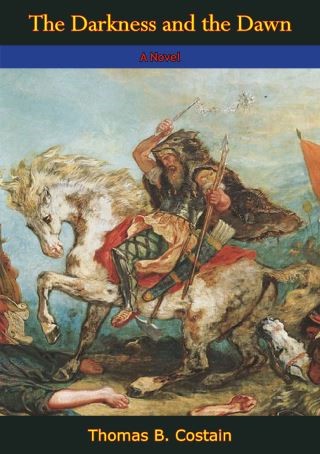 The Darkness and the Dawn

The Darkness and the Dawn is filled with suspense from beginning to end. It includes an international horse race, a spectacular trial in the most unusual of courts, and one of the decisive battles of all time. This new Costain novel will be compared to his surprise best seller, The Black Rose, which swept the book lists for many months in the 1940s, although this latest work is, in all important respects, much superior. Portraying the days when the might of Attila the Hun hung over the civilized world like a black cloud, the author brings into sharp focus the loves and hates, ambitions and schemes of all the main characters. Here they are in full perspective: Attila, the Scourge of God, his powerful barbarian army, his many wives, his sons, his generals, and his fantastic court; Aetius, the dictator of Rome, the most controversial figure of his time; Honoria, the love-minded princess of the imperial line; Leo, the strong and courageous pope; Nicolan, the hero of the story, and the girl with golden hair who rides the black horse.

It is the opinion of the publishers that this amazing story, drawn on the broadest of canvases, is the best historical novel that has come from the pen of Thomas B. Costain.

Thomas B. Costain: Thomas Bertram Costain (May 8, 1885 - October 8, 1965) was a Canadian journalist and best-selling author of historical novels.

Born in Brantford, Ontario, he attended the Brantford Collegiate Institute. Before graduating from high school he had written four novels, one of which was a 70,000 word romance about Maurice of Nassau, Prince of Orange.

His first writing success came in 1902 when the Brantford Courier accepted a mystery story from him, and he became a reporter there. He was an editor at the Guelph Daily Mercury between 1908-1910. He joined the Maclean Publishing Group in 1910, editing trade journals, and joined writer for the Toronto-based Maclean’s magazine, becoming editor in 1917. His success there brought him to the attention of The Saturday Evening Post in New York City, where he became fiction editor for 14 years.

In 1942, he realized his longtime dream when this first novel For My Great Folly was published, and it became a bestseller. In January 1946, Costain retired to spend the rest of his life writing, at a rate of about 3,000 words a day.

He received a Doctor of Letters (D. Litt) degree from the University of Western Ontario in May 1952 and he received a gold medallion from the Canadian Club of New York in June 1965. The Thomas B. Costain public elementary school (1953) and the Thomas B. Costain—S.C. Johnson Community Centre (2002) in Brantford are named in his honour.