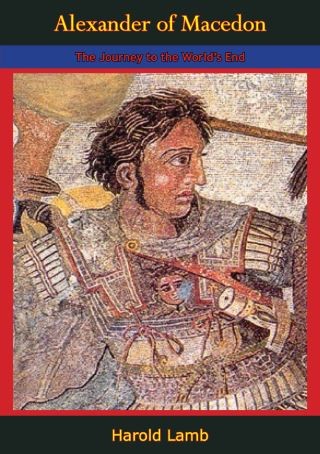 The Journey to the World’s End

From the dark forests of barbarian Europe, across the illimitable steppes of Asia, into the cities of golden India—Alexander led his invincible Macedonians to conquer the world.

Harold Lamb, the superb historian-storyteller—whose brilliant Genghis Khan, Suleiman the Magnificent and Tamerlane have been read by millions—brings to pulsing life the story of a man who towered above his age, conquered the world, and forever changed the tide of human destiny.

Harold Lamb: Harold Albert Lamb (September 1, 1892 - April 9, 1962) was an American historian, screenwriter, short story writer, and novelist. Born in Alpine, New Jersey to Eliza Rollinson and Frederick Lamb, he attended Columbia University, where his interest in the peoples and history of Asia began, and received a Guggenheim Fellowship for twelve months in 1929. He built a career with his writing from an early age. He gained his start in the pulp magazines and quickly moved to the prestigious Adventure magazine, which became his primary fiction outlet for nineteen years. Following the success of his 1927 biography of Genghis Khan, he turned more and more to the writing of non-fiction, penning numerous biographies and popular history books. The success of Lamb’s two-volume history of the Crusades led to his discovery by Cecil B. DeMille, who employed Lamb as a technical advisor on a related movie, The Crusades, and used him as a screenwriter on many other DeMille movies thereafter. Lamb spoke French, Latin, Persian, and Arabic, and, by his own account, a smattering of Manchu-Tartar. He died in 1962 in Rochester, New York, aged 69.