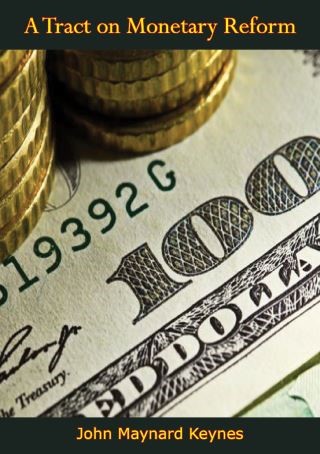 A Tract on Monetary Reform

In A Tract on Monetary Reform, which was first published in 1923, British economist John Maynard Keynes argues that the objects of British government should be the stability of trade, price, and employment. The gold reserve should be demonetized. However, this does not mean that gold serves absolutely no purpose anymore. Rather, it is a store of value and a means of correcting the influence of a temporarily adverse balance of payment.

“This is a very brilliant as well as a very important book. Like all that Mr. Keynes writers, it is full of matter, and also full of wit…If any argument were wanted to show that whether we like it or not, we must tackle the monetary problem, it is to be found in Mr. Keynes’s book. It is a bright light, and though it may, if misused, do harm to the eyesight of some people, it throws a light, and a true light, on the world’s dilemma.”—The Spectator

John Maynard Keynes: John Maynard Keynes, 1st Baron Keynes CB FBA (5 June 1883 - 21 April 1946), was a British economist whose ideas fundamentally changed the theory and practice of macroeconomics and the economic policies of governments. He built on and greatly refined earlier work on the causes of business cycles, and is widely considered to be one of the most influential economists of the 20th century and the founder of modern macroeconomics. His ideas are the basis for the school of thought known as Keynesian economics and its various offshoots.

In the 1930s, Keynes spearheaded a revolution in economic thinking, challenging the ideas of neoclassical economics that held that free markets would, in the short to medium term, automatically provide full employment, as long as workers were flexible in their wage demands. He instead argued that aggregate demand determined the overall level of economic activity and that inadequate aggregate demand could lead to prolonged periods of high unemployment. Keynes advocated the use of fiscal and monetary policies to mitigate the adverse effects of economic recessions and depressions.

Following the outbreak of World War II, the leading Western economies adopted Keynes’s policy recommendations, and in the two decades following Keynes’s death in 1946, almost all capitalist governments had done so. Keynes’s influence waned in the 1970s, partly as a result of the stagflation that plagued the Anglo-American economies during that decade, and partly because of criticism of Keynesian policies by Milton Friedman and other monetarists. He and other economists had disputed the ability of government to regulate the business cycle favourably with fiscal policy.