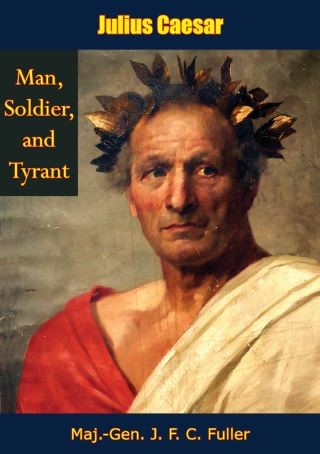 Since the Renaissance, Julius Caesar has been idolized as a superman. Classical sources, however, present a far less exalted being. As General Fuller writes, Caesar was "an unscrupulous demagogue whose one aim was power, and a general who could not only win brilliant victories but also commit dismal blunders....It is reasonable to suspect that, at times, Caesar was not responsible for his actions, and toward the end of his life, not altogether sane."

There is no doubt that Caesar was an extraordinary man. But Fuller points out that he was extraordinary for his reckless ambition, matchless daring, and ruthless tyranny, rather than for his skills as a military commander. Caesar continually had to extricate himself from results of mistakes of judgement. His unnecessary Alexandrian War, his close call at Thapsus, and his seemingly unpremeditated Gallic conquest are just a few of Fuller's many examples. And in telling Caesar's history, Fuller illuminates a century of Roman history as well.

Aided by maps of Caesar's principal battles and diagrams of many of his weapons, Fuller brings to life Caesar's wars, his armies, his equipment, and his methods. Brilliant in design and impressive in scope, Julius Caesar clarifies how the military, political, and economic aspects of the Roman Republic worked together to produce a man whose name has come down to us as a synonym for absolute authority.

With 45 books and many articles, he was a highly prolific author whose ideas reached army officers and the interested public. He explored the business of fighting, in terms of the relationship between warfare and social, political, and economic factors in the civilian sector, and emphasized the potential of new weapons, especially tanks and aircraft, to stun a surprised enemy psychologically.

Born in 1878 at Chichester in West Sussex, the son of an Anglican clergyman, he trained at the Royal Military College in Sandhurst from 1897-1898. He was commissioned into the 1st Battalion of the Oxfordshire Light Infantry (the old 43rd Foot) and served in South Africa from 1899-1902. He served as an adjutant to the 2nd South Middlesex Volunteers and helped form the 10th Middlesex.

During WWI, he was a staff officer with the Home Forces and with 7 Corps in France, and from 1916 in the Headquarters of the Machine-Gun Corps’ Heavy Branch (later Tank Corps). He helped plan the tank attack at the 20 November 1917 Battle of Cambrai and the tank operations for the Autumn offensives of 1918.

After the war, he became military assistant to the chief of the Imperial General Staff in 1926, was promoted to major general in 1930, and retired in 1933 to devote himself entirely to writing. He served as a reporter during the Italian invasion of Ethiopia (1935) and the Spanish Civil War (1936-39). His ideas on mechanized warfare continued to be influential in the lead-up to WWII.

Fuller died in Falmouth, Cornwall in 1966.