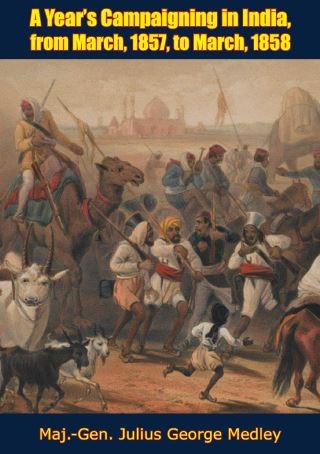 In A Year’s Campaigning in India, which was first published in 1858, author Julius George Medley provides the reader with a vivid account of the events—and the distinguished part he took—in March 1857 through to March 1858 during the India Rebellion.

The rebellion began on 10 May 1857 in the form of a mutiny of sepoys of the Company's army in the garrison town of Meerut, 40 miles northeast of Delhi (now Old Delhi). It then erupted into other mutinies and civilian rebellions chiefly in the upper Gangetic plain and central India, though incidents of revolt also occurred farther north and east. The rebellion posed a considerable threat to British power in that region, and was contained only with the rebels' defeat in Gwalior on 20 June 1858.

An unmissable addition to complete any British Military History collection.

He was born on July 19, 1829 and gazetted in 1847. He arrived in India in 1849 and joined the Public Works Department as Assistant Engineer in 1850. He served as Consulting Engineer for Railways at Lahore, the Punjab Northern Railway and was instrumental in pushing on other railway construction in India.

As Field Engineer, he served with the force under Brigadier Chamberlain against the Bozdars, on the lower Derajat frontiers, in 1857. Early in 1858 he joined Outram, and acted as directing Field-Engineer with the army under the Commander-in-Chief during the final siege of Lucknow. After the capture, Medley was appointed Garrison-Engineer. He was quickly promoted to Captain and then Brevet-Major. He attained full rank of Colonel in 1881, and that of Major-General in 1884.

Medley held various important civil appointments, including Deputy Consulting Engineer for Railways at Lahore in 1858-1860, followed by Principal of the Civil Engineering College, Calcutta, and then Under-Secretary to Government in the Public Works Department.

At the close of the war, although control of the two State lines was transferred to the Director-General of Railways, Medley continued to exercise control over upwards of 2000 miles of railway and witnessed an extension of the lines of Northern India at a rate of 200 miles a year.