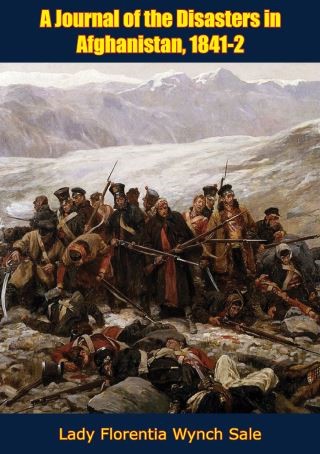 A Journal of the Disasters in Afghanistan, 1841-2

During the First Anglo-Afghan War, Lady Florentia Sale, wife of a British army officer, Sir Robert Henry Sale, was kidnapped in 1842, along with other women and children, as well as soldiers, and detained for nine months. The group were taken hostage by Akbar Khan, following the massacre in the Khurd Karbul Pass. Amongst the hostages with Lady Sale was her youngest daughter Alexandrina, Alexandrina’s husband Lt. John Sturt, and their newborn daughter. Sturt was fatally injured by three dagger wounds to the abdomen, with Lady Sale nursed her son-in-law in his final hours. She bribed the Afghan officers into releasing them, and they were rescued by Sir Richmond Shakespear on 17 September 1842. Her courageous and defiant actions meant that she endangered herself frequently; she was shot in the wrist, with the bullet lodging there.

Throughout her time as a captive, Lady Sale kept a diary, detailing the events of the ordeal. A year later, Lady Sale published her journal as A Journal of the Disasters in Afghanistan, 1841-2, which documented her experiences throughout the Afghan War, and the book received critical acclaim.

An action-filled story of folly, indecision, treachery and tragedy, all the while testifying to great courage and fortitude.

Lady Florentia Wynch Sale: Florentia Sale (née Wynch; 13 August 1790 - 6 July 1853) was an Englishwoman who travelled the world while married to her husband, Sir Robert Henry Sale, a British army officer. She was dubbed "the Grenadier in Petticoats" for her travels with the army, which took her to regions such as Mauritius, Burma and India, and various other areas under the control of the British Empire.

Lady Sale was born in Madras, during Company rule in India, the daughter of George Wynch, a member of the civil service. Her grandfather, Alexander Wynch, was the Governor of Madras for a time during the 1770s. She was raised by her uncles and received a good education as a child.

In 1809, she married Sir Robert Henry Sale of the British Army. She accompanied him on his numerous postings, raising their children while he fought. The couple's first child, daughter Mary Harriet, was born a year after their marriage, on 17 February 1810 in Walajabad. By the time of the birth of her second child, she had moved to Mauritius, where Sale was stationed; George Henry was born in 1811 in Port Louis, Mauritius. Five of the couple's other children were born in Port Louis too, the last being in 1818. On 1 October 1820, she bore her eighth child, Henrietta Sarah, in Montluel, France. Her last child, Alexandrina was born nearly three years later, on 2 January 1823 in Calcutta, India.

Lady Sale's husband died in action in 1845, leaving her widowed. She remained in India for most of the rest of her life. After her husband's death she received a pension of £500 per annum in light of her conduct as a prisoner and her husband's military services. Sale took a trip to the Cape of Good Hope in 1853 for her health, though she died not long after her arrival, on 6 July 1853, in Cape Town, South Africa.