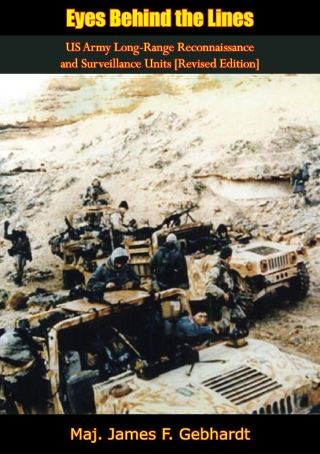 Eyes Behind the Lines

Eyes Behind the Lines: US Army Long-Range Reconnaissance and Surveillance Units is the 10th study in the Combat Studies Institute (CSI) Global War on Terrorism (GWOT) Occasional Paper series. This work is an outgrowth of concerns identified by the authors of On Point: The United States Army in Operation IRAQI FREEDOM. Specifically, these authors called into question the use of long-range surveillance (LRS) assets by commanders during that campaign and suggested an assessment ought to be made about their continuing utility and means of employment. This revision contains some important additional information the author received after this book was originally published.

Major (Retired) James Gebhardt, of CSI, researched and wrote this Occasional Paper with that end in view. In this study, Gebhardt surveys the US Army s historical experience with LRRP and LRS units from the 1960s Cold War and Vietnam War, through their resurgence in the 1980s and use in Operations JUST CAUSE and DESERT STORM, to the advent of the GWOT. The paper's analytical framework examines each era of LRS units in terms of doctrine, organization, training, materiel, leadership, and personnel. In doing so, the author makes a strong case for continuing the LRS capability in the Army s force structure.

The variety of environments and enemies likely to be faced by the military in the GWOT continues to demand the unique human intelligence abilities of trained and organized LRS units. As the Army leads the Armed Forces of the United States in combating terrorists where they live, the lessons found in this survey remain timely and relevant.

Maj. James F. Gebhardt: James F. Gebhardt retired from the US Army in 1992, having served as an infantry enlisted man, armor officer, and Soviet foreign area officer. He fought in the Vietnam War as a rifleman in a mechanized infantry platoon and as a long-range patrol team leader, then was a drill instructor at Fort Dix. After commissioning through ROTC in 1974, he served in armor units at Fort Benning and Mainz, Germany, where he commanded an M-60A3 tank company in 1982-3. In his last active duty assignment he escorted Soviet military, scientific, and diplomatic personnel throughout the western United States to conduct disarmament inspections for the On-Site Inspection Agency.

A native of Grand Forks, North Dakota, Mr. Gebhardt earned a B.A. in political science from the University of Idaho in 1974 and an M.A. in history from the University of Washington in 1976. While assigned to the Combat Studies Institute (CSI) in 1986-88, he researched and wrote Leavenworth Paper No. 17, The Petsamo-Kirkenes Operation: Soviet Breakthrough and Pursuit in the Arctic, October 1944. His other published works include several book-length translations about Soviet army and navy operations in World War II, a series of translated technical manuals for Soviet-era small arms, and numerous Internet-based article-length translations on Soviet military history subjects. He rejoined CSI as a civilian contractor in 2004 and researches and writes historical studies of current interest to the Army. His first study in the Global War on Terrorism series was Occasional Paper 6, The Road to Abu Ghraib: US Army Detainee Doctrine and Experience, published in March 2005.