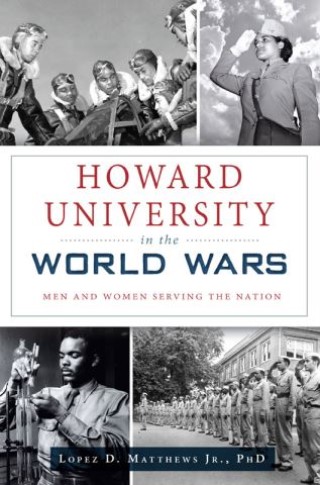 Howard University in the World Wars

Men and Women Serving the Nation

Despite African Americans' lack of political, social and economic equality in the United States, the students of Howard University answered the call to service in both world wars. Howard supported its men and women in the quest to serve their nation. The university started an army training program during the First World War, and Howard faculty, staff and students pushed the War Department to begin an officer training school for African Americans. The university organized a Reserve Officer Training program in the interwar years, the first at an HBCU. Many of the famed Tuskegee Airmen of World War II were trained first at Howard. Based on a collection of letters sent by Howard students and alumni to the university, historian and archivist Lopez D. Matthews illuminates their wartime experiences.

Lopez D. Matthews Jr. PhD: Lopez D. Matthews Jr. is the manager of the Digital Production Center and digital production librarian for the Howard University Libraries and the Moorland-Spingarn Research Center. He is a commissioner on the Maryland Commission on African American History and Culture and a member of the board of directors of the Reginald F. Lewis Museum of Maryland African American History and Culture in Baltimore. He has published several articles and is the editor of volumes including Liberating Minds…Liberating Society: Black Women in the Development of American Culture and Society.