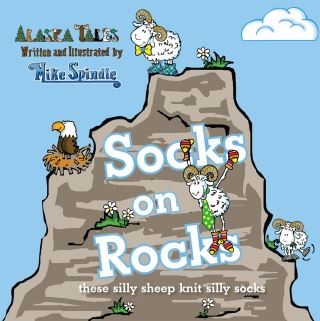 As a toy designer, sculptor, and illustrator for Disney, Hallmark Cards, Hasbro, and others, Mike Spindle has helped bring to market a variety of toys and gifts for more than 35 years. From L.A. to New York, and places in between, Mike has met, illustrated, and sculpted notable characters including Mickey Mouse, Winnie the Pooh, Care Bears, Muppets, Bugs Bunny, Phineas and Ferb, and Doc McStuffins, just to name a few. But, the call of the wild brought Mike north to Alaska. It was only natural that he met silly Dall sheep who knit socks and ties. He was told it was to protect their feet, but Mike believes the sheep just want to wear the latest fashions. This is one of the ALASKA TALES.