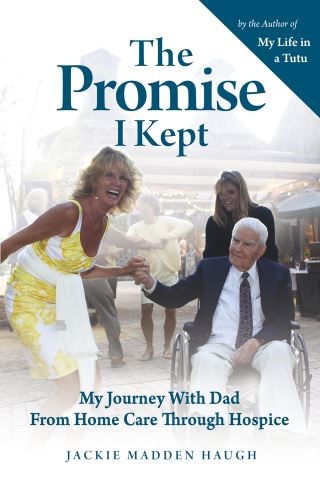 The Promise I Kept

My Journey with Dad from Home Care Through Hospice

The Promise I Kept is a poignant, funny, and often heartbreaking story of a daughter's journey to live up to a vow that she never put her father, Jack, into a nursing home; his greatest fear for his final days. Thirteen years later, now a single mother, the marker would be called in after her mother's passing. For the next nie years, Jackie Madden Haugh would watch over her father's care, first in his home with live-in help and finally with her. Totally unprepared for her new role, Jackie thought it would be an easy job. After all, her kids saw her as Super Mom ready to take on all of life's messes. But she quickly found her world filled with adult diapers, a pharmacy of pills, and days heavily laced in utter boredom. Cut off from friends, her children and work, she began to crumble. As the days melted together, Jackie came to understand the rocky road they traveled was not about what she was doing for him, but what her father was teaching her that would change the trajectory of how she'd continue to live her life: in constant gratitude and with a heart filled with enormous love.

Jackie Madden Haugh: Jackie Madden Haugh calls herself the Guardian of Memories, a storyteller who preserves family history in the written form. Her first book, My Life in a Tutu, the story of a single woman in her fifties searching for the woman she was born to be after divorce, was launched in 2015. She is a columnist for a local newspaper, The Los Altos Town Crier, where she writes musings on how she sees the world. Jackie was born and raised in the Bay Area of northern California and is the mother of four adult children.