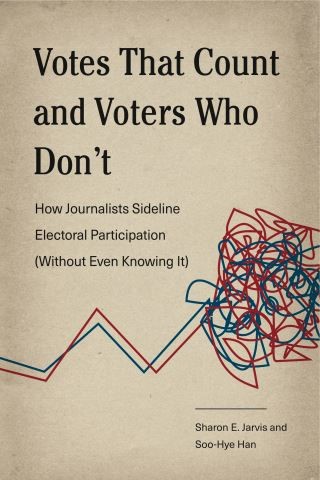 Votes That Count and Voters Who Don’t

How Journalists Sideline Electoral Participation (Without Even Knowing It)

For decades, journalists have called the winners of U.S. presidential elections—often in error—well before the closing of the polls. In Votes That Count and Voters Who Don’t, Sharon E. Jarvis and Soo-Hye Han investigate what motivates journalists to call elections before the votes have been tallied and, more importantly, what this and similar practices signal to the electorate about the value of voter participation.

Jarvis and Han track how journalists have told the story of electoral participation during the last eighteen presidential elections, revealing how the portrayal of voters in the popular press has evolved over the last half century from that of mobilized partisan actors vital to electoral outcomes to that of pawns of political elites and captives of a flawed electoral system. The authors engage with experiments and focus groups to reveal the effects that these portrayals have on voters and share their findings in interviews with prominent journalists. Votes That Count and Voters Who Don’t not only explores the failings of the media but also shows how the story of electoral participation might be told in ways that support both democratic and journalistic values.

At a time when professional strategists are pressuring journalists to provide favorable coverage for their causes and candidates, this book invites academics, organizations, the press, and citizens alike to advocate for the voter’s place in the news.