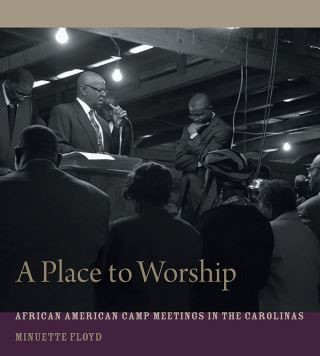 A Place to Worship

Camp meetings—also called revivals—originated with circuit-riding Methodist preachers who gathered congregations in open fields and town squares. However, the sermons had messages that were not always welcomed by mainstream Protestant churches in the colonial and antebellum South. With the help of white itinerant preachers, enslaved African Americans organized their own camp meetings in conjunction with the white revivals. These celebratory events were predominantly spiritual, with preaching, worship, and communion, but also offered a chance for family reunions. After the Civil War, independent African American congregations built on this antebellum heritage by establishing permanent camps that continue to welcome meetings today. In A Place to Worship, Minuette Floyd shares an intimate portrait of the culture, traditions, and long history of the camp meeting as one of the most vital institutions in the lives of rural African Americans in North and South Carolina. As a child Floyd attended camp meetings each year in North Carolina, and she renewed her interest in them as an adult. For the past eighteen years Floyd has travelled to campgrounds throughout the Carolinas, documenting the annual tradition through photographs and interviews. Floyd has sought to record not only a visual record of the places and practices of each, but also the rich and inspiring stories of the people who make them thrive.