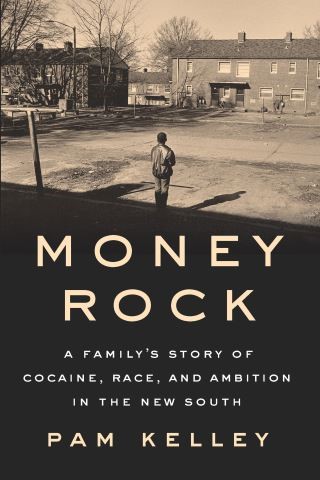 A Family’s Story of Cocaine, Race, and Ambition in the New South

An ambitious look at the cost of urban gentrification.”
Atlanta-Journal Constitution

Kelley could have written a fine book about Charlotte’s drug trade in the ’80s and ’90s, filled with shoot-outs and flashy jewelry. What she accomplishes with Money Rock, however, is far more laudable.”
Charlotte Magazine

Pam Kelley knows a good story when she sees one—and Money Rock is a hell of a story. . . like a New South version of The Wire.”
Shelf Awareness

The saga begins in 1963 when a budding civil rights activist named Carrie gives birth to Belton Lamont Platt, eventually known as Money Rock, in a newly integrated North Carolina hospital. Pam Kelley takes readers through a shootout that shocks the city, a botched FBI sting, and a trial with a judge known as “Maximum Bob.” When the story concludes more than a half century later, Belton has redeemed himself. But three of his sons have met violent deaths and his oldest, fresh from prison, struggles to make a new life in a world where the odds are stacked against him.

This gripping tale, populated with characters both big-hearted and flawed, shows how social forces and public policies—racism, segregation, the War on Drugs, mass incarceration—help shape individual destinies. Money Rock is a deeply American story, one that will leave readers reflecting on the near impossibility of making lasting change, in our lives and as a society, until we reckon with the sins of our past.