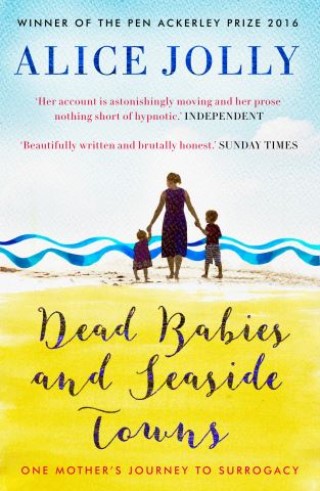 WINNER OF THE PEN ACKERLEY PRIZE 2016

When Alice Jolly's second child was stillborn and all subsequent attempts to have another baby failed, she began to consider every possible option, no matter how unorthodox.

Shot through with humour and full of hope, Dead Babies and Seaside Towns is an intensely personal account of the search for an alternative way to create a family. As she battles through miscarriage, IVF and failed adoption attempts, Alice finds comfort in the faded charm of Britain's crumbling seaside towns.

The journey ultimately leads her and her husband to a small town in Minnesota, and to two remarkable women who offer to make the impossible possible.

In this beautifully written book, Alice Jolly describes with a novelist's skill the events that many others have lived through – even if they may feel compelled to keep them hidden. Her decision not to hide but to share them, without a trace of self-pity, turns Dead Babies and Seaside Towns into a universal story: one that begins in tragedy but ends in joy.