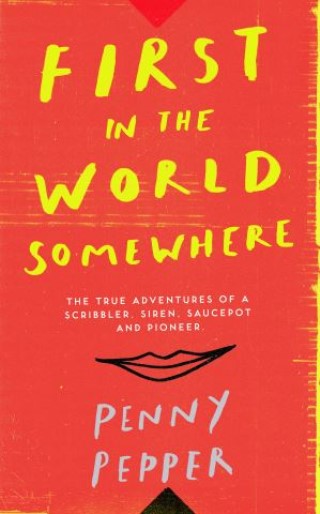 First in the World Somewhere

The True Adventures of a Scribbler, Siren, Saucepot and Pioneer

Penny Pepper has led an extraordinary life. She is a writer, an activist, a punk pioneer. She also happens to be disabled. In her absorbing memoir, Penny paints a raucous picture of life, love, music and misadventure, from Thatcher’s battleground of the mid-1980s through to the early Blair years.

Craving freedom from the home counties council estate where she grew up, Penny dreams of moving to London and finding her way in the city’s punk scene. Without what others take for granted, she sets out armed only with her raw, burgeoning talent to fight the social demons of indifference and bigotry, all while dressed in leather bondage skirts, fishnets and hair extensions.

There are parties; there’s sex; there’s music. She exchanges letters with Morrissey. Ken Livingstone helps her find a wheelchair-accessible flat. Her demo tape is reviewed in the NME and played on the radio. Her album Spiral Sky is No. 1 in Greece for a week. And there is opportunity – to join the radical beginnings of the disability rights movement.

First in the World Somewhere is the chronicle of her passions and her struggles, told with startling honesty and a razor-sharp wit, fearless in the face of prejudice.