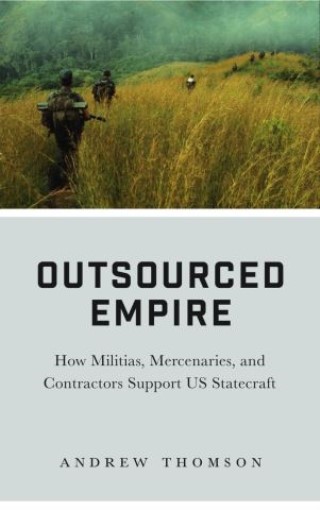 How Militias, Mercenaries, and Contractors Support US Statecraft

Andrew Thomson rethinks the history of US imperialism, from the Cold War to today, to reveal how paramilitaries, militias, mercenaries, private armies, and contractors have always been central to US-sponsored insurgencies and US counterinsurgent statecraft.*BR**BR*Examining a broad range of events from the Bay of Pigs to the occupation of Iraq, and from the Soviet-Afghan war to the ongoing conflict in Syria, Thomson offers an analysis of the evolution of US support for various para-institutional actors or non-state armed forces. He demonstrates how and why militias, mercenaries, and private military companies have increasingly formed a central part of US imperial strategies designed to influence political and economic conditions abroad.*BR**BR*Drawing on declassified documents including military training manuals, CIA communiqus, and national security documents, Outsourced Empire reveals new evidence that helps us understand these institutions and their collective role in maintaining global order.