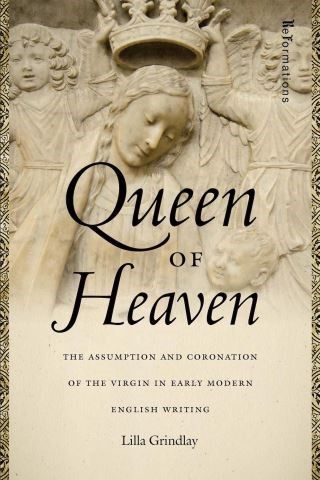 The belief that the Virgin Mary was bodily assumed to be crowned as heaven’s Queen has been celebrated in the liturgy and literature of England since the fifth century. The upheaval of the Reformation brought radical changes in the beliefs surrounding the assumption and coronation, both of which were eliminated from state-approved liturgy.

Queen of Heaven examines canonical as well as obscure images of the Blessed Mother that present fresh evidence of the incompleteness of the English Reformation. Through an analysis of works by writers such as Edmund Spenser, Henry Constable, Sir John Harington, and the writers of the early modern rosary books, which were contraband during the Reformation, Grindlay finds that these images did not simply disappear during this time as lost “Catholic” symbols, but instead became sources of resistance and controversy, reflecting the anxieties triggered by the religious changes of the era.

Grindlay’s study of the Queen of Heaven affords an insight into England’s religious pluralism, revealing a porousness between medieval and early modern perspectives toward the Virgin and dispelling the notion that Catholic and Protestant attitudes on the subject were completely different. Grindlay reveals the extent to which the potent and treasured image of the Queen of Heaven was impossible to extinguish and remained of widespread cultural significance. Queen of Heaven will appeal to an academic audience, but its fresh, uncomplicated style will also engage intelligent, well-informed readers who have an interest in the Virgin Mary and in English Reformation history.