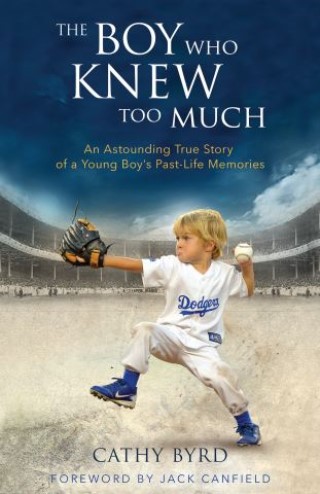 The Boy Who Knew Too Much

An Astounding True Story of a Young Boy's Past-Life Memories

The compelling and heartwarming story of a young baseball prodigy who began sharing vivid memories of being famed American baseball player Lou Gehrig.

At the tender age of two, baseball prodigy Christian Haupt began sharing vivid memories of being a baseball player in the 1920s and '30s. From riding cross-country on trains, to his fierce rivalry with Babe Ruth, Christian described historical facts about the life of American hero and baseball legend Lou Gehrig that he could not have possibly known at the time.
Distraught by her son's uncanny revelations, Christian's mother, Cathy, embarked on a sacred journey of discovery that would shake her beliefs to the core and forever change her views on life and death.
In this compelling and heartwarming memoir, Cathy Byrd shares her remarkable experiences, the lessons she learned as she searched to find answers to this great mystery, and a story of healing in the lives of these intertwined souls.
The Boy Who Knew Too Much will inspire even the greatest skeptics to consider the possibility that love never dies.

Cathy Byrd: Cathy Byrd is a busy realtor and mother of two young children who never had aspirations of becoming a writer until her son began sharing vivid memories of being a baseball player in the 1920s and ‘30s. When she is not busy writing or selling homes, the most likely place to find Cathy is on a baseball field in Southern California.