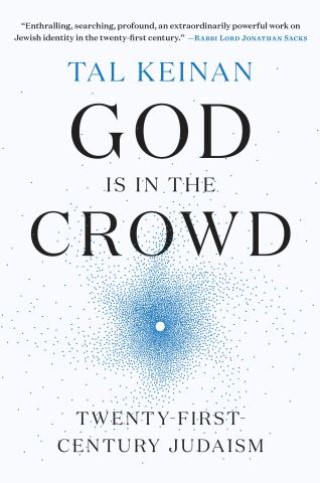 God Is in the Crowd

A bold proposal for discovering relevance in Judaism and ensuring its survival, from a pioneering social activist, business leader, and fighter pilot in the Israeli Air Force

God Is in the Crowd is an original and provocative blueprint for Judaism in the twenty-first century. Presented through the lens of Tal Keinan’s unusual personal story, it a sobering analysis of the threat to Jewish continuity. As the Jewish people has become concentrated in just two hubs—America and Israel—it has lost the subtle code of governance that endowed Judaism with dynamism and relevance in the age of Diaspora. This code, as Keinan explains, is derived from Francis Galton’s “wisdom of crowds,” in which a group’s collective intelligence, memory, and even spirituality can be dramatically different from, and often stronger than, that of any individual member’s. He argues that without this code, this ancient people—and the civilization that it spawned—will soon be extinct. Finally, Keinan puts forward a bold and original plan to rewrite the Jewish code, proposing a new model for Judaism and for community in general.

Keinan was born to a secular Jewish family in Florida. His interest in Judaism was ignited by a Christian minister at his New England prep school and led him down the unlikely path to enlistment in the Israel Air Force. Using his own dramatic experiences as a backdrop, and applying lessons from his life as a business leader and social activist, Keinan takes the reader on a riveting adventure, weaving between past, present, and future, and fusing narrative with theory to demonstrate Judaism’s value to humanity and chart its path into the future.

Advance praise for God Is in the Crowd

“Beautifully written, brilliantly argued, this is a unique contribution to the conversation and a must read for anyone concerned with Jewish continuity.”—Yossi Klein Halevi, author of Letters to My Palestinian Neighbor

“God Is in the Crowd blends social science, economics, religion, and national identity to help us see more clearly who we are as individuals, people, and a society.”—Dan Ariely, author of The Upside of Irrationality

“American, Israeli, entrepreneur, fighter pilot, and investor: Keinan’s diagnosis of Israel and the Jewish Diaspora is provided through the lens of a rich and gripping life story. Keinan’s contribution is indispensable to the debate about the future of the Jewish people.”—Dan Senor, co-author of Start-up Nation

Tal Keinan: Tal Keinan is an American-born entrepreneur and social activist. He is a co-founder of Clarity Capital, a global asset-management firm, and chairman of Koret Israel Economic Development Funds, Israel’s largest nonprofit lender to small and micro businesses. He serves on the boards of directors of the Steinhardt Foundation for Jewish Life and the HESEG Foundation, is a Young Global Leader of the World Economic Forum, and is chairman of the YPO Intercontinental Chapter. He holds a master’s degree in business administration from Harvard Business School and is a graduate of Israel’s Air Force Academy.