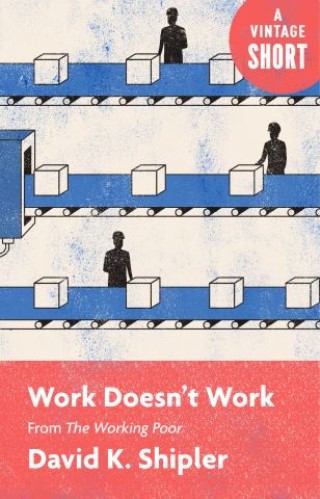 From The Working Poor

At the bottom of America’s working world, millions live in the shadow of prosperity, in the twilight of poverty and prosperity. Many are trapped for life in a perilous zone of low-wage work that keeps middle-class comforts and necessities forever beyond their reach despite the often long and hard hours they put in at their jobs, as bank tellers, food service employees, copyeditors, car washers and others.

In his authoritative study of how our country has consistently and still is failing its working poor with low wages, diminished benefits and rampant instability, bestselling and Pulitzer Prize-winning author David K. Shipler draws on researched facts and scores of personal testimonies to paint a bleak of the short shrift that so many of us, even in a booming economy, are bound by.

David K. Shipler: DAVID K. SHIPLER reported for The New York Times from 1966 to 1988 in New York, Saigon, Moscow, Jerusalem, and Washington, D.C. He is the author of six previous books, including the best sellers Russia and The Working Poor, as well as Arab and Jew, which won the Pulitzer Prize. He has been a guest scholar at the Brookings Institution and a senior associate at the Carnegie Endowment for International Peace, and has taught at Princeton, American University, and Dartmouth. He writes online at The Shipler Report.